MapRun, a simple phone app which allows you to create and manage orienteering courses with minimal effort, no ground infrastructure etc that has to be set out and collected up, and almost no effort on the ground to plan courses.

Originally demonstrated to Victorians in 2015 at Westerfolds Park by its developer Peter Effiney, Maprun was trialled during the last Geelong and Surf Coast Summer Series. Initially events were run in parallel with the conventional punched card/control plates events. After the initial 6 weeks of experience the Maprun app has been significantly revised to provide a robust and reliable tracking tool. The final 6 weeks of the Geelong Series were exclusively Maprun events and this format has proved a huge success. The idea now is to develop a programme of MapRun events to run alongside our other events, targeted at non-orienteers, and those of us looking for something different to do on training runs or whatever.
We are presently running MapRun events in the Western Autumn Night Series coincident with conventional punched card/light pole controls courses.
It is a tool for urban and suburban environments – it is less reliable in the forest – but for those it brings a number of advantages over our current street series events: It doesn’t require special maps, courses can be planned almost wholly from your desk; and the phone app handles timing, scoring and results processing, so the planner/organiser has very little to do on the day.

We are looking at the best way to exploit MapRun as a means of attracting active people who are looking for something new to try. Meanwhile, as a taster of a new way of orienteering, the following images show part of my run last night in Footscray.
Post run reports include a RouteGadget report whereby other competitors’ routes can be compared and the event can even be rerun with graphical display of competitors moving around the course. 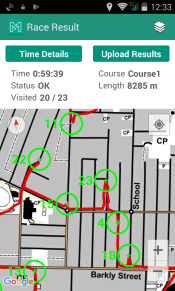