A great new area, West of Redesdale. Discovered by Rex Niven and mapped by Alex Tarr.

The event was a great success thanks in particular to : Course setter Rex Niven

Another 10 or so NE members who helped with parking, pre start, finish, control collection and general pack up.

The area is generally runnable, spur gully with isolated rock and some thicker bush in the South, well away from the shorter courses.

Weather unpleasant on the Saturday, when we were setting up. However, on the event day, we only had a very small amount of rain, with patches of sunshine.

Rex negotiated with an adjoining land owner to use one of her paddocks for parking.

Most participants gave favourable feedback. It was suggested that the area would be suitable for school groups and/or relays, as it is relatively small and surrounded by open farm land.

Video of Simon Rouse: Geoff Hudson sent this link to me and thought it was very impressive – heart rate shown….but the puffing and the way he talks to himself tells the story too. He passes Rob Edmonds on the way down to the creek from control 5. 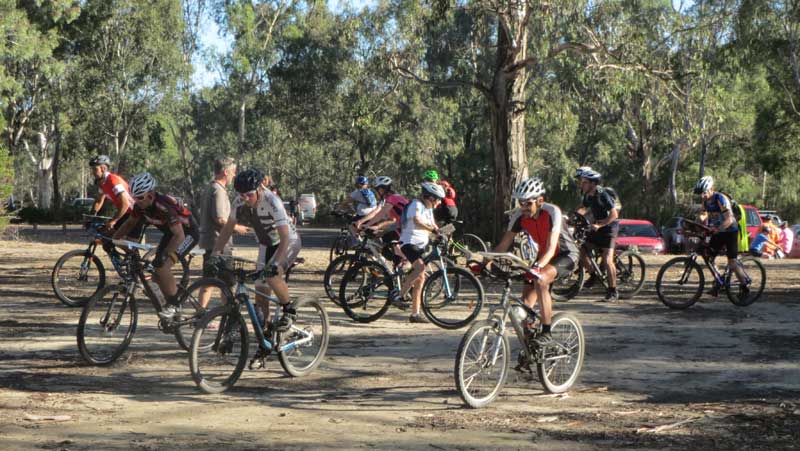 Nillumbik Emus ran the event on a well loved Tuckonie map with the assistance of some TK members. With 53 riders gathered there was plenty of action around the assembly area. The Woodlands map has been updated with the 2 x 4 track system and some newly mapped areas. Keith Wade put a lot of thought into the course planning. Geoff and Schon Hudson set up the registration and results system on the clubs new computers. Geoff has developed a very user friendly and compact system with results going up on a screen and a small but powerful battery storage.

All was going well until John Gavens had a serious fall which required a rescue. Phil Giddings abandoned his course to assist and with another rider Gavin Thomas raised the alarm. Thank you also to Carolyn Cusworth for rendering assistance. Keith and Rob drove out and brought John Gavens back to base. He was driven to hospital but fortunately, though sustaining a badly strained shoulder, suffered no breakages or dislocations, as first feared.

Other club members present were Joyce Rowlands who got a bit lost finding the event site, Jim Glaspole who had a solid ride.,Jeff Hughes who assisted with packing up, Daniel Edmonds and Peter Maloney who collected some controls before dark after solid rides. Helen Edmonds helped put out controls and Ron Frederick helped set up and pack up. Phil collected some controls, getting in just before dark; but one control had to be collected next day. Thanks to Geoff and Schon for fetching it in.

Don wrote: There were 64 entries at Copperfield Rocks. I was very happy with the turnout as many of our people don’t travel far out of the Williamstown-Yarraville comfort zone.

Navigating my way by car through the streets was one of the worst experiences of my life – comparable to losing contact with the map in the middle of The Cascades!

Fortunately, it was much easier for the competitors on foot.

Anne Robinson wrote: An interesting new map “Copperfield Rocks” in Delahey for the Tuesday Western Summer series. Don Fell’s course setting provided more route choices than obvious at first glance and there were some close finishes and much comparison afterwards. The complex street network with pedestrian and bike access paths was a challenge in some ways but allows the locals to get out and about. Several orienteers commented on the numbers that were in the streets and parks and many gave us a friendly greeting. Not always the case!

The Maxi was held for the first time on the Mt Tarrengower map, Maldon. Derek Morris took the initiative to course set on the Bendigo OC map; a huge 1:10,000, A2 map. The Maldon Netball/Football club rooms gave the organisers a great venue for admin and catering. Late July can be quite cool and this day was no exception. Fortunately the forest was dry and the 82 competitors who set out soon warmed up. Ben Goonan and Craig Feuerherdt had a very close finish, both finishing the entire course of 30 controls, only 8 minutes apart. Congratulations to Thorlene Egerton for her superb effort, scoring 1500 points. Bruce Arthur would almost certainly have finished the course and given Ben and Craig a run for their money had he not had a late start

Alice and Helen Edmonds were the overall winners in the team category as well as the open female class. Patrick Jaffe won the junior male class and Asha Steer was the winning junior female. A pleasing aspect was the number of first timers who took part. Competitors enjoyed hot soups, cakes and fruit after the event, provided by Lauris Stirling and the catering crew. Thank you to everyone who took part and assisted with the running of the event.

Tarrengower.pdf  Pictures from the Tarrengower Maxi

In perfect Orienteering weather 140 competitors enjoyed challenging courses set by Rex Niven. They were a little longer than we are used to, as the forest was nearly totally runnable and not particularly steep. Thanks to our hard working “thin controller”, course advisor Tim Hatley, organiser Ron Frederick and the hard working team of NEV volunteer officials.

Results, Route Gadget and Winsplits may be viewed athttp://www.vicorienteering.asn.au/results/.

Results are also displayed on Eventor.

The Western Park-Street Series hosted two events for the City of Maribyrnong “Get Active” Expo.

On a wet night at the Whitten Oval 15 keen participants braved the elements at a “Come and Try It” event.

Thanks to Fiona, Ken and Don who worked at the event and to Ed and William for the course setting and BK for use of the map, and to Rick and the City of Maribyrnong for organising the Expo and use of facilities.

And the following Saturday at Footscray Park approx. 50 joined in with the Saturday Series crowd in glorious weather.
Results are listed with the overall Saturday Series results. http://www.vicorienteering.asn.au/gfolder/parkstreet/results/7-sat/event3.html

Thanks to Fiona, Ken and the TK members who worked at the event, to Don for course setting and to Peter and the Tuckonie club for use of the map, and to Rick and the City of Maribyrnong for organising the Expo and use of facilities.

This year’s competition was held in Ballarat and organised by Eureka Orienteers.

Last year’s teachers’ games event was won by Robert Edmonds. Rob broke the drought after a run of 5 silver medals, in 2012.